Xena: Their Courage Changed Our World
Book To Be Published September 04, 2020
by AUSXIP Publishing 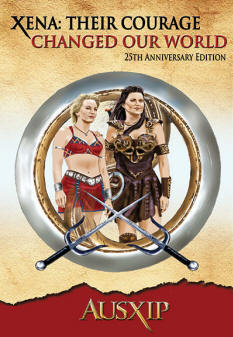 Renee's Acting Studio Moves to Online Courses Due To COVID-19
Posted on: 10 September 2020

Renee posted the following news on her ROC Pictures site on May 15, 2020 Acting Classes Online May 15, 2020 Renee O’Connor’s Acting Studio has moved online to keep students and staff safe during these challenging times. Virtual classes will continue for the foreseeable future. New classes begin in July.…

Renee has posted on her official Instagram account about Xena's 25th Anniversary by posting Steven's photos of the fans!   View this post on Instagram Borrowing images from @fsuwriter from the decades, celebrating Xena and Xena fans. Happy 25 years! Look at all the smiling faces. ((Whose costume did I…

This looks great! To celebrate Xena's 25th Anniversary, Syfy is creating a podcast! This sounds like so much fun. Hey Xenites! Celebrate the 25th anniversary of Xena: Warrior Princess with a brand new SYFY Fangrrls podcast. Hosted by resident Xena mega fan, Katie Wilson, we’re looking back at over…

Message From Rob Tapert To The Fans About Xena's 25th Anniversary!
Posted on: 3 September 2020

Rob sent a message to all the fans on Xena's 25th Anniversary! Sept 4 1995 marked a new era in television with the launch of XENA: WARRIOR PRINCESS. She boldly went where no woman on television had gone before and opened the door for women as leads in tv series.…

Are We There Yet? 4 September - Xena 25th Anniversary and Book Release
Posted on: 3 September 2020

Linda Crist shared some fantastic pics of Renee on Twitter. Check them out below   I am here for #ReneeDay! One of the kindest souls on the planet. #ReneeOConnor #Xena pic.twitter.com/TdWmuIBSlT — Texbard (@Texbard) August 29, 2020…

Renee has been announced to attend FanFusion UK on 3-5 September 2021 More info can be found on their website https://fanfusionuk.com/ Renee O’Connor, a successful actress and filmmaker is best known for playing the role of Gabrielle, Xena’s trusted sidekick on the popular series Xena:Warrior Princess from 1996-2001. In 2002,…

Xena Featured In List of Eight Fantasy Series You Must Check Out!
Posted on: 5 August 2020

Cursed tells a reimagined story of King Arthur and Excalibur, flipping the script and centering Nimue, the mythical Lady of the Lake, as the series' hero. The series premiered on Netflix and quickly claimed the top spot on the streaming service. While fans wait on news of a potential Season…

The following is from Creation Entertainment about the rescheduled Xena Convention. As we hope everyone is staying safe and healthy, the excitement is building to see our fellow Xenites in 2021 to celebrate the 25th (& 26th) anniversary of Xena: Warrior Princess in L.A.! Lucy Lawless, Renée O’Connor and all…

Renee was interviewed as part of the epic Syfy Xena Marathon which is happening every Thursday. It’s an extensive almost thirty minute interview. Video by Lori Boyles and edited by MaryD.

Xena Marathon Video: Renee and Lucy About “Been There Done That”
Posted on: 18th April 2020

Renee and Lucy talk about the episode “Been There Done That” during the Xena Marathon on April 16, 2020

Renee O’Connor Interview On Instagram Live About A Question of Faith April 12, 2020
Posted on: 12th April 2020

Renee was interviewed on Instagram Live (a 24 minute interview) with Angela White, the producer of A Question of Faith movie. The movie was released three years ago but on April 12, 2020 (Easter Sunday) it was released on Lifetime. Renee talks about the movie but also briefly talks about Lucy and the upcoming Xena […]

Syfy is holding their mega Xena Marathon with Lucy and Renee hosting the event! It starts on 16 April so if you are in the US, you are in for a treat! Go here to watch online: https://www.syfy.com/xenawarriorprincess Here’s a promo video (Lori was quick off the mark with this one!)

October is going to be Macbeth month… Here’s some promos that Renee has been releasing!

Renee and Her Son Miles Talk About Romeo & Juliet
Posted on: 20th February 2018

Renee and her son Miles on Facebook Live to talk about the Southern Shakespeare Company’s production of Romeo and Juliet! Renee will be starring at the Nurse and her son will be Romeo.

In an effort to capture amateur video of outer space, two young brothers unexpectedly find themselves in harm’s way, when an innocent science experiment becomes a day filled with unearthly events threatening their sleepy coastal town.